THE STORY OF M V SAFEER

A true story of heroism by the crew of the MV Safeer when they braved the severestadversity and managed to sail out of war-torn Kuwait in September 1990 with 722Indian expatriates, including 265 women and children, and bring them safely to Dubai, in one of the biggest sea evacuations of people in a cargo vessel designed to carry only 40 persons. This humanitarian mission, carried out free of cost, is a shining example of the resounding success achieved by the collective efforts of Indians from all walks of life.

https://frontline.thehindu.com/the-nation/article25037970.ece
AFTER the Safeer completed the rescue mission on September 7, 1990, it sailed for Bedi Bunder in Gujarat. There the ship was given detention orders as the consignees alleged that the Safeer did not deliver the cargo in Kuwait to the consignees.
The cargo was discharged on the orders of the Iraqi army and neither the Captain nor the shipowners had any control over this situation during the Iraqi occupation of Kuwait. The Protection and Indemnity Club got involved and gave the necessary guarantees to allow the ship to sail.
Some other consignees also tried, in various far eastern ports, to detain the vessel for non-delivery of cargo in Kuwait. This caused severe disruptions in normal trading of the ship and eventually the owners were forced to sell the ship and incurred heavy losses.

WE wish to thank and acknowledge the efforts of all the parties who were responsible for making this mission successful. Our thanks to K.P. Fabian and his team at the Ministry of External Affairs; the Ministry of Shipping; the Indian Navy; the Iraqi authorities; S.M. Mathur and officials at the Indian Embassy in Kuwait; Joe Monteiro; Capt. Matthews, Nautical Surveyor, Port of Shuwaikh; Frank Rosario of our agency in Kuwait; the Indian community in Kuwait and Dubai, the Dubai police; the Dubai immigration authorities; Peter Mathias and all our office staff in Dubai and Mumbai; and Dr Kinnikar for their help and dedication without which this mission could not have been accomplished.
Special thanks
To my mentor, and senior colleague, the late Capt. Ibrahim Hussain Modak, for his continuous support, encouragement and guidance during the extremely stressful period when the Safeer was detained in Kuwait. I interacted with him regularly in strategising an action plan and kept him apprised of the day-to-day progress of events as they unfolded.
I was travelling between Mumbai, New Delhi and Dubai during this period in order to conclude negotiations with the Iraqi consulate/authorities and the Ministry of External Affairs and to finalise arrangements with the Dubai immigration/police authorities for security measures and clearances for passengers in Dubai. Hanif Modak was fully involved in assisting me with all our efforts in Mumbai and played a major role in pacifying the family members of the crew.
Capt. Modak was in Dubai throughout and was attending to all matters pertaining to the rescue efforts at his end, ably supported by Peter Mathias, our Dubai office manager.
To the late L.D. Parekh and Suresh Parekh and Naresh Parekh of Parekh Marine Agencies, Mumbai, who assisted us in establishing contact with the MEA and rendered their expertise and help in our interaction with the MEA as well as trying other avenues for the release of the officers and crew.
To S.K. Mankad, Chairman of P & I Services, Mumbai, for supporting and guiding us in all matters relating to insurance policies of MV Safeer and interacting with underwriters and West of England P & I Club.

To Dr M.A. Patankar for giving us the first breakthrough by arranging a meeting with the Iraqi attache in Mumbai.
To the Master, officers and crew for their exemplary conduct, dedication and heroic efforts for reuniting the passengers with their families. 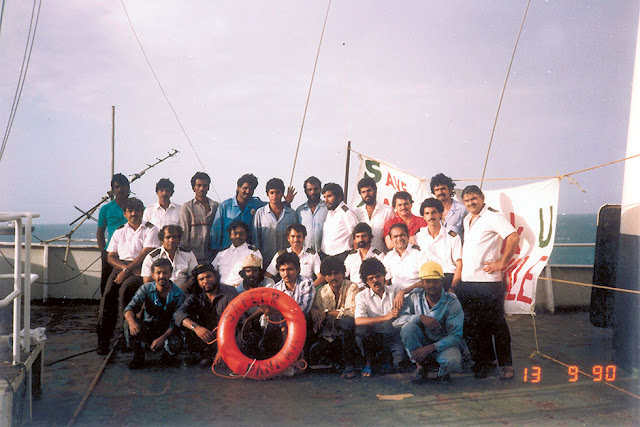 THE CREW OF
M V SAFEER

A true story of heroism by the ship's crew who faced tremendous odds in face of adversity and eventually managed to sail out of war torn region of Kuwait, with 722 Indians expatriates which included 265 women and children and brought them safely to Dubai, in one of the biggest sea evacuation of refugees on a cargo vessel, designed to carry only a complement of 40 persons.
This is a glaring example of the collective efforts of Indians from all walks of life who came together selflessly, in making this humanitarian mission a resounding success.​​

This humanitarian mission was carried out free of costs. 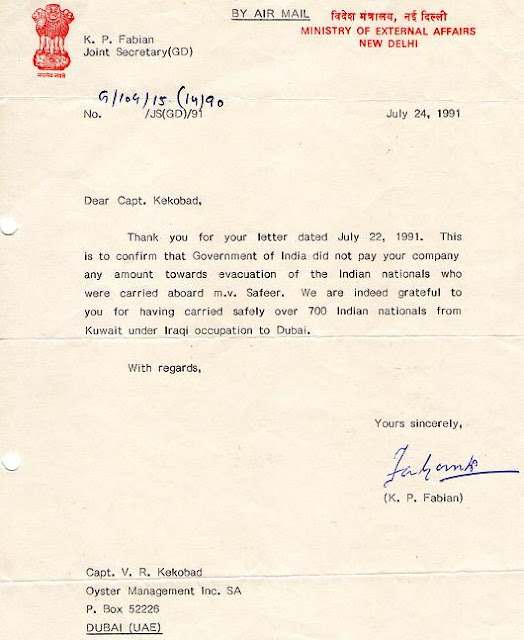 M V Safeer was the only ship which was allowed to sail out of Kuwait with 722 Indian Nationals ( which included 265 women, children and infants) on this historical and humanitarian voyage which has NO PARALLEL IN RECENT HISTORY.This humanitarian mission was carried out in August - September 1990 free of costs by the owners. 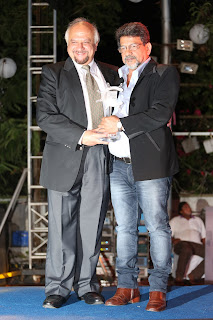 Capt V R Kekobad and Mr Hanif Modak
COPYRIGHT-
ALL CONTENT,PICTURES AND VIDEOS ON THE SITE ARE PROPERTY OF THE OWNERS OF THIS SITE- CAPT VIRAF KEKOBAD AND MR HANIF MODAK
No comments: